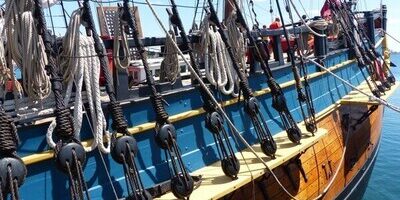 Some history of vitamin C and how it was discovered

Here we go a little bit into the past and want to tell something from the history of vitamin C. While Between the 15th and 18th centuries, many seafarers lost their lives to what was then a mysterious disease. The sailors first suffered from mouth rot, which made itself felt through bleeding gums, tooth loss, tiredness and loss of energy, joint pain, fever and skin inflammation. The further course was that there was internal bleeding and the periosteum lifted off the bone.
It was the terror of seafarers and for many years the cause was not known. Because this disease was fatal if left untreated, the Royal Navy lost more ships in the 18th century than to wars and enemy attacks. This disease was called scurvy and was every sea captain’s fear for centuries. Although a doctor recommended lemon juice for seafarers as early as the 16th century, this went unheeded. This was to continue for several centuries, because nobody knew about vitamin C back then.
Albert Szent-Györgyi first discovered ascorbic acid. He also received the Nobel Prizes in Physiology and Medicine. It was not until 1932 that vitamin C was also used by the authorities as a remedy for the dreaded disease scurvy. This was then the beginning of a great and long history of vitamin C. From then until today, however, the vitamin has always been treated a bit “ neglected ” and people simply did not really want to believe that a single vitamin can have so much influence on our health.

The long journey of ascorbic acid

Another two-time Nobel Prize winner, the chemist Linus Pauling https://de.wikipedia.org/wiki/Linus_Pauling was the one who supported and published higher doses of vitamin C in 1970. He saw the power and importance of ascorbic acid and publicized his research. However, even this Nobel Prize winner was hardly heard and was even attacked somewhat by scientific circles.
After all, it was already known at that time that vitamin C was a very important vitamin. Numerous research and studies have clearly demonstrated its effectiveness.
In addition to the conventional vitamin C tablets, the direct infusion of vitamin C was now also increasingly used. Especially serious illnesses such as cancer were treated with infusions. However, the disadvantages of such a high-dose vitamin C therapy could hardly be avoided until now. (Risk of infection, relatively expensive, limited duration of blood saturation, only to be administered by trained personnel) It was not until the 1970s that liposomal administration became more and more known. In Europe, however, it took another 30 years before this became known there as well.

The breakthrough came with oral administration of liposomal vitamin C. The patient could now comfortably carry out his vitamin C therapy at home. No more needles, no more trained staff was necessary and the constant blood saturation could now be achieved through oral administration (also several times a day). In this type, the vitamin C is encapsulated in a liposome. In this way, it can reach our cells undamaged and without losses. Since it is a lipid, it can survive the aggressive stomach acid without being damaged. The liposome is then absorbed by the intestine and released directly into our bloodstream. An infusion is therefore no longer necessary, since high doses of vitamin C can also be administered in this way.